The Long anticipated release is here.  We have spent a lot of time and resources in 2012/2013 to make this happen.  These Urethane Bushings not only replace the worn problematic #2 Caster Arm bushing up front on the JSZ16 GS300, GS400 and GS430 1998-2005 with adjustment for Caster correction. Unlike other product offerings in the market, these bushings are specifically engineering to work in the rocker function that the stock version does.  This means no egging out, no deformation, no noise, just performance. This version is adjustable(offset) allowing for caster changes or camber changes if installed with our adjustable #1 bushing whci will release early 2014. Caster adjustment done via alignment prior to press fit.  For more caster press the large bushing area towatrds the rear of the car.  Once press fit simple assemble the center cylinder and end caps with the included grease and let the good times roll.  We searched for 3 years for a great manufacturer to make these and SuperPro delivered.  We invested the time so you can get them with 1-click, enjoy.

NOTE PLEASE VERIFY O.D. OF YOUR BUSHING IF YOU OWN A 2000 GS AS THE ARMS WERE CHANGED MID YEAR. 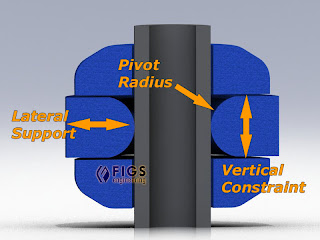 Set includes 2-Bushing sets for to replace both front arms.

Includes cups and threads to drive in just about any bushing imaginable.  We found it a great asset ..

Nearly 2 Years of development yields the first round of Outer Tie Rod Ends for the 2GS and LS40..

These bushings are supplemental bushings, meaning they surround and support the existing OEM subfram..

Nearly 2 Years of development yields the first round of Outer Tie Rod Ends for the GS and LS an..